Dow Chemical’s new multi-million dollar plant begins operating during the summer. The site manufactures products for the agricultural, oil, gas, transportation and pulp and paper industries. Dow built the site at Fort Saskatchewan because of the readily available and low cost natural resources.

Imperial Oil completes construction of the largest integrated fertilizer complex in Canada, in Redwater. This facility is now owned by Nutrien.

Chevron completes construction of a fractionation, storage, and transportation terminal for natural gas liquids on the site now known as Keyera (Fort Saskatchewan).

The Fort Saskatchewan site is built as a storage terminal for Natural Gas Liquids (NGLs) produced as a by-product of gas processing.

The Cochin pipeline system starts transporting HD5 propane, ethane, and ethylene from Fort Saskatchewan to the mid-west United States and then to Windsor, Ontario.

The $1.4 billion state-of-the-art Scotford Refinery opens along with a chemical plant at the Scotford site. Shell becomes the first refinery in the world to refine only synthetic crude oil from Alberta oil sands deposits.

Changes to Machinery and Equipment Taxes

Northeast Region Community Awareness and Emergency Response (formerly a subcommittee of FSRIA) forms as a non-profit organization to continuously strengthen an integrated emergency response capability in the region and to develop a cooperative community awareness program.

The FSRIA Business and Economics Committee advances the concept of a collaborative approach to industrial growth between industry and the four host municipalities. This results in the formal launch of Alberta's Industrial Heartland Association in 1998.

Umicore purchases the cobalt powder business from The Westaim Corporation and incorporates it as Umicore Canada.

Air Liquide's Scotford complex begins operation with oxygen and nitrogen gases produced for local industry along with liquid oxygen, nitrogen and argon for broader distribution throughout Alberta and the U.S.

Chemtrade purchases the specialty chemicals business from The Westaim Corporation.

The Northeast Capital Industrial Association (NCIA) forms as a successor to the Fort Saskatchewan Regional Industrial Association (founded in 1981). Members wanted a new organization with a clearer mandate to understand and address environmental concerns related to industrial operations and development in the area. They also wanted an association through which industry could take cooperative action on other common interests.

NCIA partners with Northeast Community Awareness and Emergency Response (NR CAER) to launch a new community notification system, the first of its kind in Canada, featuring an UPDATEline and a call-out system.

MEGlobal is established via a joint venture between the Dow Chemical Company and Petrochemical Industries Company of Kuwait.

North West Upgrading secures approximately 17 square kilometers of industrial property near Redwater for the future construction of a new upgrader.

Shell Canada announces its application to the Alberta Energy Utilities Board for approval to build a four-phase upgrader expansion northeast at its Scotford site, boosting expansion to 700,000 barrels per day. In 2010, the application was pulled.

Dow Chemical shuts down its chlor-alkali and ethylene dichloride plants and announces it will be closing its third Fort Saskatchewan plant in 16 months – the styrofoam plant, slated for closure in 2009.

Enbridge Pipelines (Athabasca) is selected by Fort Hills Energy LP to develop the Fort Hills Pipeline Project to provide pipeline transportation services for the proposed Fort Hills Oil Sands Project mine and upgrader. The construction of the Stonefell Terminal (to service BA Energy) was begun and 50% completed in 2007. Also, the Waupisoo Pipeline which goes through the IH was completed in 2008.

Construction of the Heartland offgas plant, initially built to process offgas from BA Energy and supply ethane to Dow Chemical, was begun and halted (80% completed) when BA suspended construction of its Heartland Upgrader.

BA Energy (now Value Chain Solutions) suspends construction on the Heartland upgrader pending further sourcing of bitumen suppliers and to align with its parent company's plans to develop its own bitumen resources and additional funding.

Cenovus begins independent operations on December 1, 2009 when Encana Corporation split into two distinct companies: one an oil company (Cenovus), the other a natural gas company (Encana).

Alberta Sulphur Terminals (Hazco Environmental) receives regulatory approval for the construction of a sulphur forming and shipping facility in Lamont County. Note: Hazco Environmental is no longer an NCIA member.

Life in the Heartland Forms 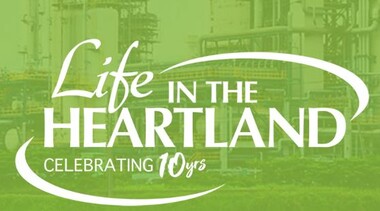 Shell announces it is withdrawing its multi-phased upgrader expansion application, focusing instead on ‘debottlenecking’ opportunities at Scotford’s existing upgrading facilities.

Aux Sable Canada (ASC) and Shell Canada Products enact a long-term Offgas Processing Agreement that will secure an offgas feedstock source for the Heartland Offgas Plant. Set to become operational in the summer of 2011, it would make ASC the first company in Alberta to extract ethane and hydrogen from an upgrader or refinery offgas stream.

The Northeast Capital Industrial Association celebrates 30 years in your community.

The Alberta Government and the partnership of North West Upgrading and CNRL formalize an agreement to process the 75,000 bbls/d of the province’s bitumen royalty volumes at the North West Bitumen Refinery.

NCIA begins to implement its Regional Noise Management Plan (RNMP), which was developed in collaboration with the Energy Resources Conservation Board (ERCB) since 2007. It is the first initiative of its kind in North America to apply industry best practices for noise management.

Dow Chemical celebrates its 50th anniversary, and also engages in the largest capital investment and maintenance turnaround in Alberta at its Fort Saskatchewan site. The estimated financial gain from this for local business is estimated at over $3 million.

North West Redwater Partnership (NWR), a partnership between NWU and Canadian Natural Upgrading Limited (CNUL), announces that the Board of Directors for each partner has approved the construction of Phase 1 of the Sturgeon Refinery.

Shell Canada announces it will go ahead with the Quest Project which will capture more than one million tonnes of CO2 annually when it starts up in late 2015. The storage site boasts some of the best geology in the world, and will be the first carbon capture and storage (CSS) project for an oil sands operation in Canada.

The Regional Noise Management Plan (RNMP) is endorsed by the Alberta Energy Regulator (AER) and the Alberta Utilities Commission (AUC).

Official groundbreaking at the Sturgeon Refinery site kicked off construction of Phase 1 of NWR's bitumen refinery.

As a member of a multi-stakeholder group, NCIA conducts significant work on behalf of its member companies on the comprehensive revision of the Municipal Government Act (MGA) Review, specifically as it pertains to industrial property taxes.

The Industrial Effluent Characterization Program (ECP) is completed with the Government of Alberta. The ECP is an important component of implementing cumulative effects management on the North Saskatchewan River, particularly in the Devon to Pakan reach (Industrial Heartland Reach).

Community organizations celebrate with NWR at the announcement of first diesel from the Sturgeon Refinery, produced from synthetic crude oil as part of the commissioning and start up process.